Lindelse Nor is one the Geopark’s finest examples of an inundated ice-age landscape. Stumps and tree trunks from Stone Age forests litter the sea floor alongside submerged settlements with countless traces of huntergatherer communities that had to abandon their habitats, seeking further inland as the ocean rose.

Lindø Island is home to a large Stone Age settlement, and scattered around the countryside are dolmens, stone circles and burial mounds dating from the Stone, Bronze, and Iron Ages. In Henninge Nor (Henninge Cove), pole barriers have been uncovered, dating from the Iron Age, the Viking period, and the Early Medieval Ages, which suggests that the site was formerly a centre of power and trade. Købeshoved was at some point a nexus of trade, possibly the forerunner of Rudkøbing. The northern part of Kværnen Island has been built as a fortification.

Public access to Lindelse Nor is limited, but the northwestern part can be reached via a branch of the Øhavsstien along the west side of Henninge Nor. Another possible route is to go by the trail leading north from the parking lot at Klæsø. Along this trail is the largest boulder on Langeland, Søstenen – a roughly 50 tons, 2.2 metres tall glacial erratic boulder composed of coarse-grained so-called porphyritic granite of roughly the same type as that found in the bedrock around Karlshamn in southern Sweden. The huge boulder was released from the melting ice around 16,500 years ago.

Those interested in diving will find an exciting 500 metres long diving route at Klæsø which allows divers to experience the submerged Stone Age landscape first-hand.

Much of the area surrounding Lindelse Nor comprises a moraine plain from the later parts of the Weichselian. In addition, there are dead-ice landscapes, outwash plains, as well as ‘hat-shaped hills’ of up to 26 metres in height scattered throughout the terrain or grouped together in short rows.

Towards the end of the Ice Age, the low-lying parts of Lindelse Nor possibly served as catchment areas for the water from the melting dead-ice left behind by the ’Storebælt Glacier’, which covered Langeland and the Great Belt (‘Storebælt’) region 18–17,000 before present. Deposits from this ice stream are visible in the low cliffs.

A few thousand years after the end of the Ice Age, the area was flooded by the sea, and Lindelse Nor was transformed into its own small archipelago with a highly irregular coastline and numerous islands. 100 years ago, the cove contained a total of 11 islands and islets. Three of these (Egholm, Kamsø and Næsholm) now form part of the reclaimed Henninge Nor, where they appear as elevated mounds surrounded by meadows and wetlands. Previously located in the middle of Lindelse Nor, the island of Flintholm was reduced to a stone reef by the sea in the 1960’s. Several of the islands in Lindelse Nor are actually the crests of ‘hat-shaped hills’ protruding from the surface of the sea. 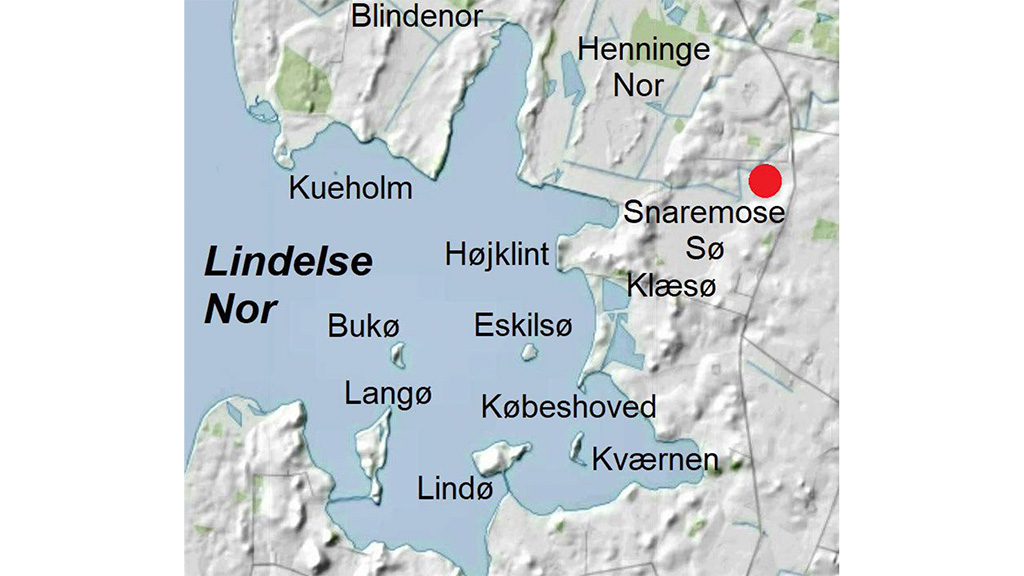 From the time when the rising sea level following the last Ice Age formed the South Fyn Achipelago, Lindelse Nor has been a mosaic of glacial landforms and new areas of land formed by the sea – so-called marine foreland. This is formed from material carried by long-shore currents and deposited in calm and shallow waters.

Most of the beaches are narrow, marshy, or stony, and in many places the vegetation reaches all the way to the water’s edge. A few low cliffs have formed along the coast, and a number of large rocks can be found there is well, having been washed out of the glacial deposits.

Five former coves within Lindelse Nor have been reclaimed over the last roughly 500 years. These are the coves Snaremose Sø, Blindenor, Klæsø Nor, the southernmost part of Lindelse Nor at Bogø, and Henninge Nor. Snaremose Sø was, however, re-established in 2002. Henninge Nor was never properly drained and cultivated.

In 1945–53 there were plans to construct a three kilometres long dam across the entrance to Lindelse Nor along the low submarine threshold separating the cove from the Strynø Basin. A complete draining of Lindelse Nor would have yielded 7.5 square kilometres of new farmland, but the plans were abandoned in the 1960’s.