Visitors can walk along the beach or go by footpaths along the slopes. Situated by the coast are six domeshaped hills known as ’hat-shaped hills’. These have been partly eroded by the sea and now appear as steep cliffsides, affording an opportunity to examine their internal structure and have a glance inside the glacial landscape of Langeland. It is possible to hike to the cliffs from Bagenkop. They can also be reached from several different parking areas located near the coast.

Visible between the ‘hat-shaped hills’ are even moraine plains with one or two thick layers of moraine clay, deposited 19–17,000 years ago. In a few places, hollows in the landscape turned into fens and wetlands following the Ice Age, an example being Gulstav Fen, located approximately 500 metres from Dovnsklint.

Gulstav Fen is one of The Bird Protection Foundation’s sanctuaries and an important breeding and resting area for birds in the area. In the northwestern corner of the bog, you will find a bird hide and a campfire site. The best time to visit Gulstav Fen is in the spring and autumn, when large migrations of raptors, doves, and various smaller birds can be observed. 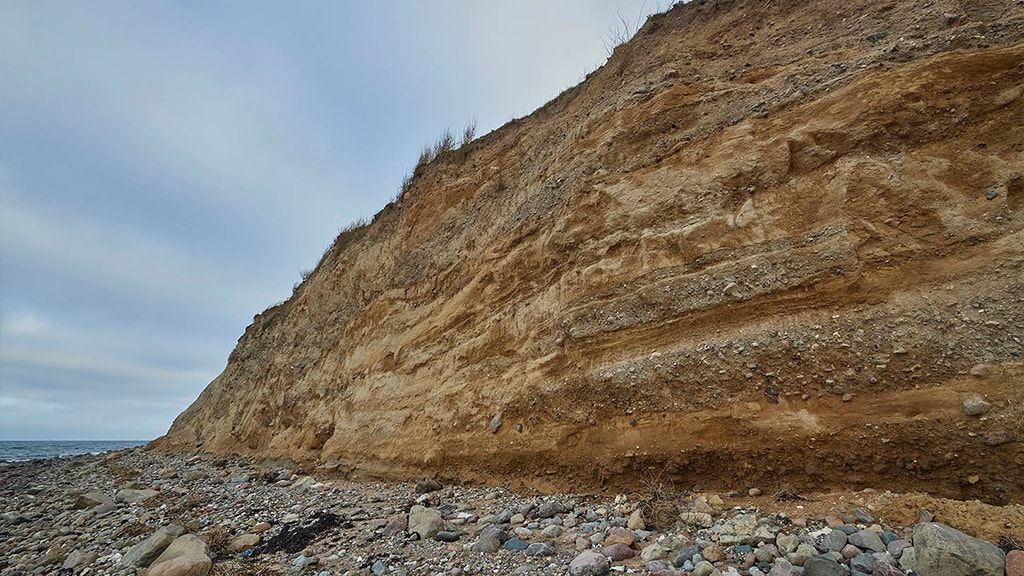 The Glacial Landscape Along the Coast

Precisely how the ‘hat-shaped hills’ were formed has long been a topic of debate among scholars. Recently, modern science has provided part of the answer to the puzzle.

About 17,500 years ago, Langeland and the Storebælt (Great Belt) region was covered by a tongue-shaped offshoot from the Bælthav Icestream known as the ’Storebælt Glacier’. When the glacier stagnated and its outermost parts became dead-ice, large networks of fissures appeared along the margins of the melting ice, and hollows formed on its the surface. These fissures and hollows filled with meltwater, forming glacial lakes.

Some of the material released from the melting ice was carried with the meltwater into the glacial lakes. Here, the water separated the different materials, which then settled as sorted layers of clay, sand, and gravel. Occasionally, unsorted layers of moraine clay-like or very stony material were deposited in the glacial lakes, particularly at times when the water level was low and landslides along the shore sent sluggish ’tongues’ of melt-out material into the lakes. At a later stage, the still active parts of the ’Storebælt Glacier’ pushed at the dead-ice and the glacial lakes, tipping over the accumulated deposits, which ended up in an inclined or vertical position. When the ice eventually melted away and the lakes disappeared, these deposits remained as features of the landscape, becoming the ‘hat-shaped hills’ as we know them today.

Due to varying conditions in the depositional environment, the different ‘hat-shaped hills’ have distinct internal structures. Those situated along the coast between Bagenkop and Dovnsklint contain more layers of moraine clay-like and unsorted stony material than many of the ones located further inland. Moreover, the layers inside the coastal ‘hat-shaped hills’ appear to have been less disturbed by ice push than the layers of those further inland. 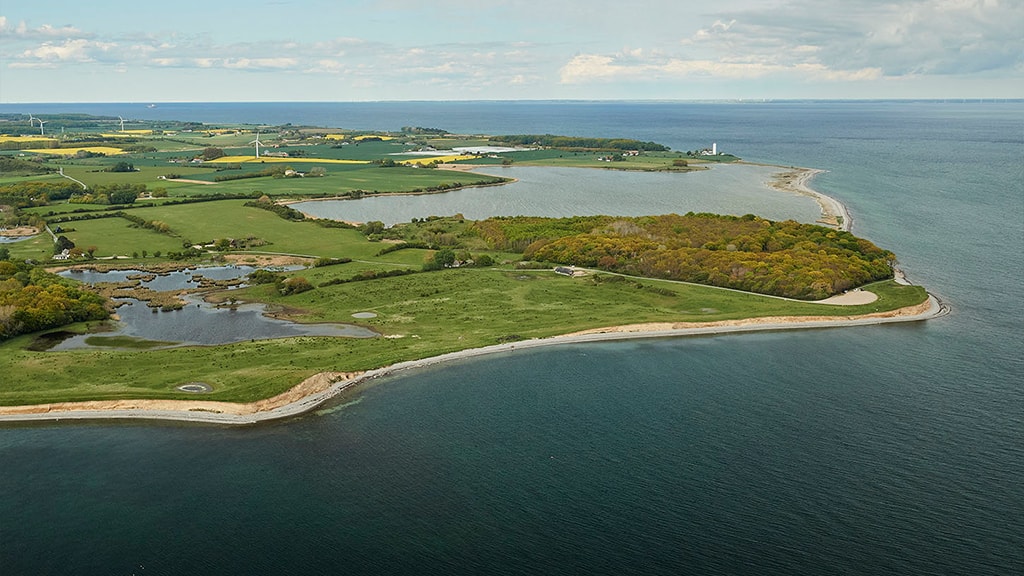 Ever since the sea inundated the area south of Fyn in the epoch following the last ice age (the Holocene), creating the South Fyn Archipelago, the sea has been gnawing away at the glacial landscape. Between the southern tip of Langeland and the north coast of Germany are nearly 35 kilometres of open sea, and almost the entirety of the littoral between Bagenkop and Dovnsklint has developed into a steep coast, where erosion has cut through several ‘hat-shaped hills’, creating lofty cliffs.

The point on Dimesodde is the last remnant of a hill otherwise completely washed away by the sea. The vaguely garland-shaped coastline is also a so-called simplificated coast, where protrusions are eroded away, and embayments are filled in. Today, the bay between Gulstav and Dovnsklint is an accumulation area with massive beach ridges consisting of rounded pebbles and cobbles, many of which are glacial indicator erratics from the Baltic region. Beach ridges containing cobbles of up to 20 centimetres in diameter have been discovered more than three metres above the present sea level. These are possibly the result of a catastrophic flood event which took place in 1872.